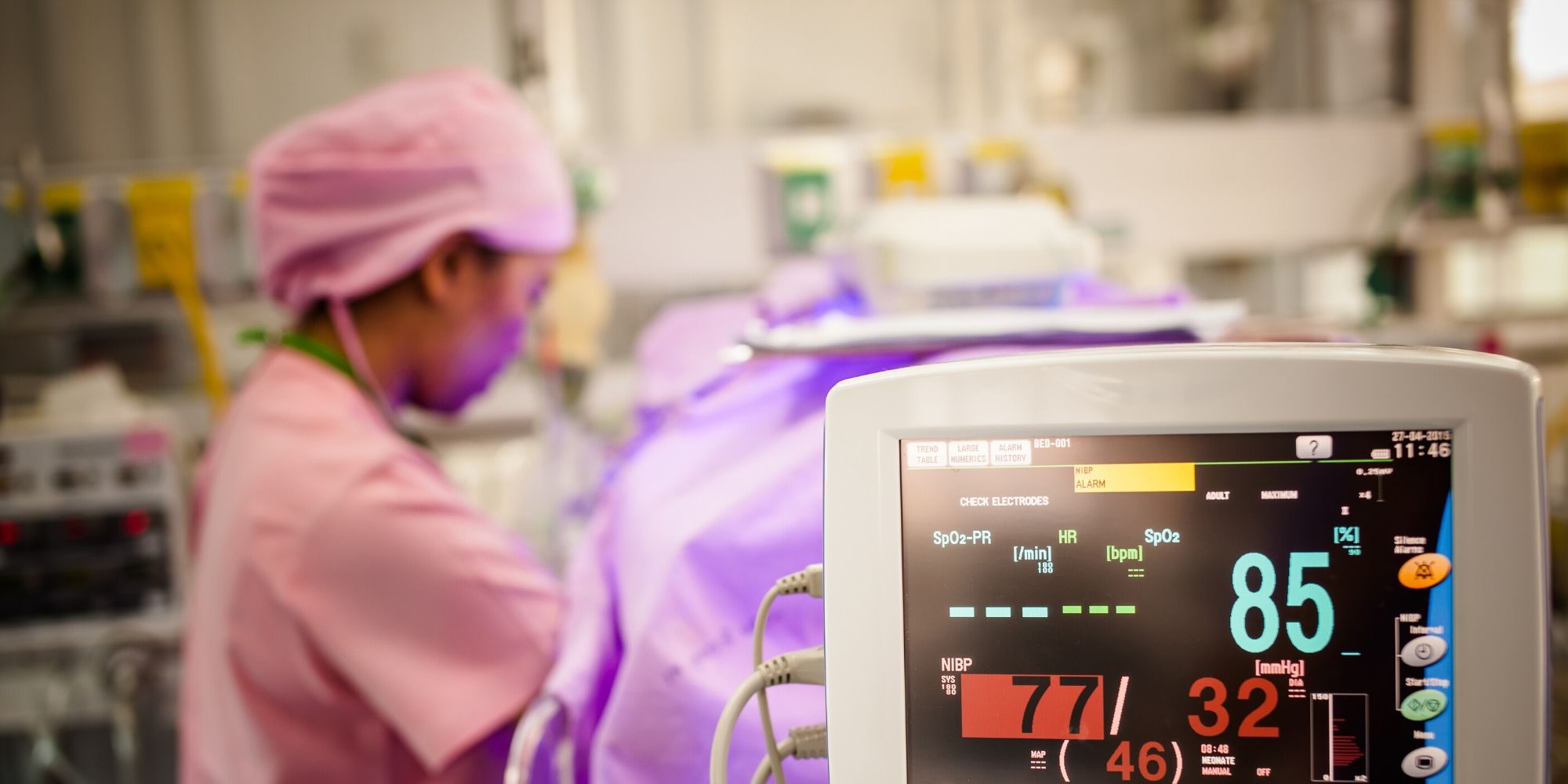 In early March, my husband Ben and I welcomed our first baby—a daughter we named Hadassah, born at the beginning of her 35th week of gestation. With an otherwise healthy pregnancy with the variable minor aches and discomforts, my water simply broke in the middle of the night.

According to the March of Dimes, November is Prematurity Awareness Month. Every year, about 450,000 babies in the United States are born before full term.

Thankfully, entering 35 weeks, there was never a question of her life being in danger, chas v’shalom. But quickly after she entered this world she was whisked away for tests to check organ development. My husband and I were grateful that more intensive medical treatment wasn’t necessary for our newborn, but we felt unprepared for the emotional rollercoaster ahead of us. We were thrown into a premature education.

Hours after Hadassah (whom we call Dassy) was born, we finally got to hold her. She was adorned with wires to monitor her heart rate and oxygen levels. She had an IV for low blood sugar. And she was in a closed incubator to stabilize body temperature. Weighing 5.3 lbs., she was a late-term premature baby, but she was still a preemie.

My daughter had a strong spirit to her. She had a sweet disposition. And thankfully, while never a sick baby, she developed a slew of common conditions that would keep her in the neonatal intensive care unit for the next five weeks.

I later learned that it is common for preemies to be sent home closer to their due dates, but this was no guarantee. Had it been calmly explained to me from the day of her birth, I don’t know if it would have sunk in anyhow.

When I was discharged two days after Dassy’s birth, my daughter hadn’t shown signs of any conditions yet, and I had false hopes of bringing her home perhaps the same day and then perhaps the next day, although I was aware that until she met the hospital’s requirements for discharge, she would not be leaving the NICU. She had to be able to maintain her body temperature, take all feedings by mouth, breathe without the assistance of oxygen, and pass an oxygen level test sitting in a car seat for 90 minutes.
Since it was a possibility that Dassy would be able to maintain her body temperature on her own by the next day, the NICU staff gave me hope that perhaps she may come home the next day, and allowed me to sleep in a special “extra room” for NICU parents since I was dedicated to nursing my daughter. Well, Monday night extended into Tuesday night. I lived a half-hour drive from the hospital and I wasn’t ready to part from my daughter. The NICU staff agreed for us to stay since they had no other requests at that time.

By then, her apnea started setting in, along with desaturations during feedings. Apnea of prematurity, the absence of breathing, would occur during her sleep; and oxygen desaturations (low levels of oxygen in her blood) would occur during feedings since she hadn’t figured out to coordinate suck, swallow and breathe. Jaundice, where high levels of bilirubin in the blood turn baby’s skin and white parts of the eyes to look yellow, would also develop and return.

The NICU staff told us this was a “neuro-maturation.” Something had to click in her brain for her to eventually grow out of these habits. She had to do it on her own. This hospital was not in the practice to send parents home with monitors.

And so, her oxygen levels would dip, sounding the machine until a nurse came to mute it. Sometimes it was a false alarm. Or her pause in breathing wasn’t long enough to require making a note of it. But each time that noise would sound, my body would tense up with worry.

And then we were told she would be kept another five days to monitor. Jaundice set in and for two days we watched her “tan” under the rays. Unless nursing, she was to remain in the incubator.

By Thursday, the head nurse at the NICU told me it was obvious my daughter would not be coming home any time soon.

I begged to stay in the hospital through Shabbat, and then I would begin making the half-hour trip from my home to the NICU daily.

We felt confused that we did not understand the full extent of our daughter’s medical situation. We felt overwhelmed with the new vocabulary thrown at us. We were mad at the false hopes we were given earlier in the week. We felt resentful that we couldn’t bring her home, like “normal people.” We felt sad that our ability to care for our newborn was limited to the daled amot allowed by the wires under the scrutiny of nurses; each insistent with their own method of instruction.

As her first week of life progressed, I developed a cough. I alerted Dassy’s administering physician, but she wasn’t alarmed. I felt tired. I felt hot. Around Wednesday, my right side began to hurt by my lower ribs and I assumed I was nursing incorrectly. The nurses told me I was doing the job correctly. I started coughing more at night, and it hurt. It hurt to breathe. I assumed it was all post-partum fatigue and hormones. Stubbornly, I didn’t want to admit it could be anything more. My husband was concerned but I wouldn’t hear it. I had to stay strong to be around our baby.

As I nursed my baby that Friday night around 3 a.m., a kind NICU nurse advised me to see a doctor. “That’s not just a tickle in your throat, honey,” she pointed out. I waited for my husband to return from morning davening before heading to the Emergency Room with my mother-in-law. My husband bonded with the baby. A fever and spiked white blood cell count alerted the ER staff to admit me back into the hospital with pneumonia. I was told I picked it up by spending so much time in the hospital.

For three days I stayed on the sixth floor of the hospital, while my one week old was on the fourth floor. Attached to an IV, I continued to pump and have a nurse send the milk down to my daughter. I was unable to be anywhere near her, not even outside a window to look at her. In my head I understood I was contagious. And in my head I knew I was fortunate that my daughter was in the best place for her care, especially while I was so weak. Once home, my husband would deliver the pumped milk every day on his way to work, and try to visit her at night.

A week later, after finishing my medication and on the mend, I returned to my daughter, still in the closed incubator. The NICU nurses would train me how to react with her when the alarms sounded from her apnea and desaturations, looking for clues at the onset—looking at her coloring of lips, of the forehead, shades ranging from reds to purple. It wouldn’t last long; often it happened so fast I didn’t realize. But it happened. Frequently.

Weary from our week apart, it felt as though the hospital lent me a baby to hold every few hours. But I was resolved to learn about my daughter—to care for her and bring her home. I stayed with her in the NICU as long as I could, allowing time to rest at home before my husband returned for the day. I asked many questions. I clarified the answers. I cried every day as I left her. Bawling.
In my head I knew the NICU was where she had to be and received excellent care, but my heart ached every day. But with each passing day of her not coming home, my raw emotions only intensified. The ache of my heart wishing to care for my daughter at home—to carry her freely unattached from wires, away from the constant beeping of monitors and what felt to me as micromanaging nurses who each had their own way of best caring for my daughter—felt heavier with each passing day, each Shabbat.

At three weeks old, she was finally able to maintain her body temperature in an open crib. The staff had monitored how she would fare in past attempts, and she failed them all.

I would call for progress reports each morning and nurse shift, hopeful for some progress. “She’s still having the desats Mrs. Rosner,” the NICU nurses would tell me. And with a deflated heart, I accepted Hashem telling me to be patient. She’ll be home when she’s ready. And she’ll be home much longer than she is here.

One day there was an emergency situation with another newborn in the NICU. I was alone with my daughter, whisked to a different section but able to see the commotion through a distant window. Two hours later, as I prepared to leave for home, I broke down yet again. I wanted my baby home. This time, the NICU staff brought in a social worker to speak with me and assist with my feelings of post-partum depression.

At three weeks, Dassy could maintain stable body temperature.
Dassy was a healthy baby born early and she needed time out of the womb to grow. I would repeat this to myself over and over.

I would tenderly whisper in her ear how proud we were of her little accomplishments. Each day she was growing healthier and stronger, she was doing all the right things.

I’d whisper to take her time. God willing, we would together at home much longer than here in the hospital.